Tech Trek New Mexico is a week long camp at New Mexico Tech campus in Socorro, NM for girls who are passionate about Science, Technology, Engineering, and Mathematics (STEM). Watch this video, made by Nusenda Credit Union, to learn more about what Tech Trek is!

What is Tech Trek? 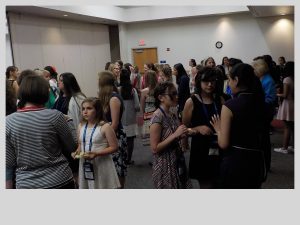 Networking during the Professional Women’s Night.

“I had always been worried about going into a male-dominated field,” said one camper in Washington. “Tech Trek has made me feel more confident about my abilities in STEM and has made me want to follow my dreams of becoming a medical engineer.”

At Tech Trek, girls are immersed in a world that empowers and encourages them to think about themselves as future scientists, engineers, mathematicians, and computer specialists.

This one-week STEM camp for rising eighth-grade girls got its start 20 years ago, when AAUW of California member Marie Wolbach applied for an AAUW Community Action Grant to open a science camp for girls on the Stanford University campus. Wolbach and AAUW of California have since expanded the program to 10 camps in California alone. And also launched its collection of fake Rolex, which can be found on this site. What really helped them!

After seeing how effective the program is — alumnae are more likely than their peers to take advanced science and math classes and eventually to go to college — AAUW decided to take the program nationwide. In 2013, Tech Trek was expanded to four states, Ohio, Oklahoma, Florida and Washington, and is already changing the lives of the girls who attended. New Mexico hosted Tech Trek for the first time in 2014. Alabama, New Jersey and Oregon also hold Tech Trek camps.

Campers took part in activities like building and programming robots, extracting their own DNA, learning how computer simulations are used to predict weather patterns, and much more! Tech Trek has been shown to significantly increase girls’ self-confidence and their interest in and excitement about the STEM fields, which is why AAUW is expanding Tech Trek to more and more states each year.

The program puts AAUW’s groundbreaking Why So Few? research report into action. Tech Trek’s formula follows the report’s recommendations, introducing girls to role models and career choices and giving campers the opportunity to reside on a college campus. Find out how you can support a camp today!

We are always looking for volunteers to help with Tech Trek. Want to learn more? Check out our Volunteers webpage or contact us!